VoiceThread has announced a new integration with Kaltura Media. You may now pull your Kaltura video content into VoiceThread quickly and easily!

This will bring up a menu. Select Media Sources.

This will bring up a list of media sources. Select Kaltura. 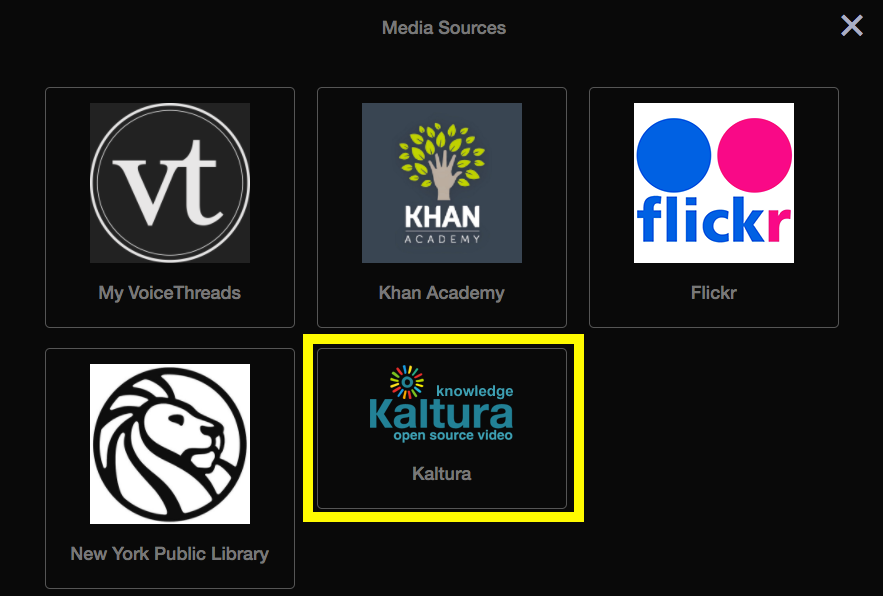 All of your Kaltura videos should begin loading on the screen. Select any video to insert it into your VoiceThread.

Once you have imported your video you may begin adding comments. See Commenting on VoiceThreads for more information or watch the tutorial video below:

Blackboard will discontinue the Voice Authoring tools on August 31, 2016.This set of tools includes Voice Authoring, Voice Board, Voice Podcaster, and Voice Email.

You can get all the whats and whys from our previous Goodbye Voice Tools post. Most importantly, if there is any content you wish to save, be sure to export it and save it to your computer before the end date. This tutorial will guide you through the process: Exporting and Importing Voice Authoring Content.

If you need assistance transitioning your content to other tools or archiving your Voice Authoring content, please email elis@lesley.edu. Remember the shut down date is August 31, 2016.

Has your class kicked off, but you still need some last minute images to reinforce a certain topic? Do your students need to do a presentation that will involve images or media? Planning to just grab stuff off Google?

Just because an image, video or even PDF is online, doesn’t mean that you can use it or share it in your course. Much of this content is copyrighted and you shouldn’t use it without permission from the owner. THOU SHALT NOT VIOLATE COPYRIGHT. “But what about fair use? I’m using it for my course,” you say. Fair use may cover your situation, but the guidelines can be tricky to navigate and you may want to consult your local librarian for assistance.

Click on it to get the details on how you can use the work.

Want more info?
Digital ID has a great, easy to read guide written by an educator, not a lawyer. Can I Use That? explains:

For a quick overview of Creative Commons, check out their short video below.

During last month’s eLearning Institute @ Faculty Development Day, I led a workshop titled Understanding Social Media and the Networked Society.  Within this session, workshop participants and I discussed the role of networked technologies in contemporary American society, first delving into some of the theoretical foundations and then identifying specific strategies for effectively utilizing social media to foster both personal and professional development.  We examined both the many opportunities and potential challenges presented by this increasingly networked world, looking into current research and theoretical discourse, attempting to reconcile the different outlooks. For example, to what extent do social networks allow us to learn from The Wisdom of Crowds (Surowiecki, 2004), or are we living within the Cult of the Amateur (Keen, 2007)?  How do we best utilize the Cognitive Surplus (Shirky, 2010) afforded by social media and avoid the superficial frenzy of The Shallows (Carr, 2011)?  By engaging with social networks, are we active, contributing members of a Participatory Culture (Jenkins, 2006), or are we simply Alone Together (Turkle, 2011), developing hollow, meaningless connections and increasing isolation?

Participants engaged in conversation on the changes in cultural norms and values, examining the shifts in how people work, share, and create.  To what extent do technology and social media provide access to connections, resources, and new knowledge?  How can we, as educators, utilize social media to effectively cultivate both personal and professional learning networks?  We then focused pragmatically on specific strategies, policies, and ways of thinking that will help participants to thoughtfully and effectively participate in this networked society.  I hope this session might serve as the beginning of a larger conversation.  eLIS is holding an online Social Media Seminar in April, 2013 for Lesley faculty and staff that will encourage participants to consistently put theory into direct practice.  We will be using Twitter as the specific tool through which to understand social media and networked technologies, connecting with colleagues to learn with and from one another.

Regardless of your personal attitude toward technology’s growing presence in our lives – let’s say on a continuum from unbridled excitement to cautious optimism to rigid skepticism – research illustrates that engagement with media and new technology is only becoming more and more ubiquitous.  A recent study conducted by the Kaiser Family Foundation reports that young people between the ages of eight and eighteen consume a total of 10 hours and 45 minutes worth of media content per day, which translates to 7 ½ hours of media consumption via multitasking. This number demonstrates an increase of almost 2 ¼ hours of media exposure per day over the past five years. The increased prevalence of new media and technologies requires young people to acquire the knowledge, skills, and vocabulary necessary to safely and respectfully engage virtually.  The Common Core Standards specify that “[j]ust as media and technology are integrated in school and life in the twenty-first century, skills related to media use (both critical analysis and production of media) are integrated throughout the standards.”  Similarly, media literacy and critical thinking have been identified by the Partnership for 21st Century Skills as essential 21st Century Student Outcomes.  Additionally, there have been an increasing number of media education initiatives spawned by outside organizations, such as Common Sense Media and the Media Education Foundation.  In a report presented by Edudemic, 44.8% of professors and 45% of k-12 teachers use social media for professional use.

As educators, we are responsible to not only understand our learners – how they connect, share, and relate – but also build environments that deliberately foster the development of meaningful connections, promoting deep intellectual convergence, thoughtful synthesis, and new knowledge.  What are the design decisions that help to foster collaborative learning?  How do we encourage all learners to understand that with this right to connect comes the responsibility to contribute effectively?  Prior to their release of the book Spreadable Media, authors Henry Jenkins, Sam Ford, and Joshua Green released a number of Web Exclusive essays.  The essay Learning to a be Responsible Circulator by Christopher Weaver and Sam Ford highlights this need to be more deliberate in how we participate in this networked world:

[a] spreadable media environment by its very nature fosters a more participatory society. Yet, in a culture where a majority of the audience has access to a ubiquitous communication environment, each person should hold a greater level of personal responsibility for establishing credibility of both content and sources… In order for a ‘spreadable media’ environment to flourish, citizens must be taught the necessary skills to independently assess the validity of what is being shared with them and to carefully choose what they share with others.

In order for us to capitalize upon the affordances of today’s networked society and strive for some sort of utopian vision of connected living, we must actively choose how we engage. We must understand that the promise of networked living is not about the individual gain – it’s more about bolstering the collective knowledge of a larger community.  In Alone Together, Sherry Turkle makes the point that today’s digital world is still quite new, reminding us that we have the opportunity to determine how we engage with these technologies. For example, a tool like Twitter can serve as a means to learn with and from others across the world. But the paradigm-shifting power of Twitter is not at the individual level.  The power lies in the collective that can emerge through the thoughtful participation of engaged Twitizens (I know).  According to educator and connected learning activist Howard Rheingold’s article on Twitter Literacy,

Twitter is not a community, but it’s an ecology in which communities can emerge. That’s where the banal chit-chat comes in: idle talk about news, weather, and sports is a kind of social glue that can adhere the networks of trust and norms of reciprocity from which community and social capital can grow.

This concept of reciprocity is inherently linked to responsibility. In order for these connected environments to flourish, we – as members of the learning community – must actively participate in the dialectical engagement that fosters depth of connection.  How do we, as educators and designers, build for reciprocity?  How do we encourage participants to adopt a mindset that supports the good of the group rather than the individual?

I wanted to end with a quotation from filmmaker Tiffany Shlain’s recently released documentary Connected.  Connected is a profoundly personal film that explores how both the private and public spheres are shaped by today’s increasingly networked world.  Shlain states within her film that “for centuries we’ve been declaring independence… And perhaps it’s time to finally declare interdependence.”  Shlain advocates for this necessary paradigm shift, asking us to not only acknowledge and embrace our connectedness but also accept the accompanying responsibilities.